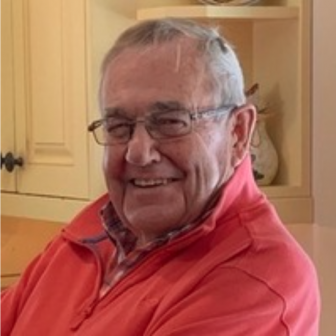 Pete was born March 10, 1938, in Boston, a son of the Rev. Dr. David R. and Jewell (Peterson) Hunter. Pete grew up in Boston, and following his graduation from The Westtown School in West Chester, Pennsylvania, he attended Bowdoin College in Brunswick, Maine, where he earned his bachelor’s degree.

On Dec. 3, 1960, Pete was united in marriage with the love of his life, Louise Walker. He served in the U.S. Army for several years and left active duty with the rank of Captain.

Pete subsequently went to work for Milliken Textiles in New York City, sparking a lifelong career in sales. His personable nature and love of connecting with other people made this career choice a perfect fit as he went onto roles with other companies of increasing responsibility ultimately resulting in senior management.

His family made its home in Darien for many years before moving to Brooklyn, New York and later Stowe, Vermont prior to moving to Lebanon, New Hampshire.

Pete was a fun-loving and gregarious individual whose universe centered around his wife and family. He worked hard and he played hard. Family time and adventure was critically important to him; he and Louise purchased a Winnebago when the girls were teenagers to explore and travel around the country.

He and Louise loved doing anything outdoors including tennis, skiing, golf, being outdoors and gathering with family and friends. They purchased a vacation home on Martha’s Vineyard in the late ’70s, and created a lot of special memories there.

After retirement, he and Louise bought a bed-and-breakfast in Stowe, Vermont, which they owned and ran for just over 10 years.

Pete is predeceased by his beloved wife of 61 years, Louise Hunter, and a sister, Joan Manzelmann of Middlebury, Vermont.

A private memorial will be held in early spring at Eastville Beach on Martha’s Vineyard, where a similar memorial was held for his beloved wife.

In lieu of flowers, memorial contributions may be made to Sail MV, PO Box 1998, Vineyard Haven, MA 02568. The nonprofit organization is dedicated to protecting and perpetuating the Island’s maritime heritage, culture, and skills for underprivileged local children.

— an obituary from Knight Funeral Home & Crematory, where online condolences may be left