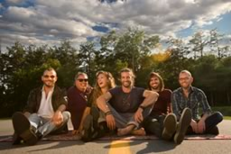 Darien Summer Nights welcomes Adam Ezra Group to Grove Street Plaza on Friday, July 22nd. The concert starts at 6 p.m. and ends at 8:30 p.m. This will be Adam Ezra’s fourth performance in Darien since 2013. 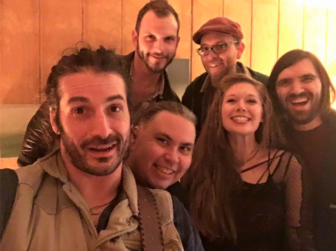 Adam Ezra Group has graduated from being at the top of the Boston music scene to breaking nationally in a big way. Adam Ezra’s passion for smart, well written lyrics combined with the band’s tight musicianship and powerful live performances are catching the ears of fans across the country.

The band’s live show is now legendary. Adam and the group ignite the stage with a captivating charisma that has often been compared to that of Bruce Springsteen and the E Street Band.

“After two hours of almost non-stop playing, Adam Ezra gives everything he has to the audience,” said Jack Casey, the General Manager of WERS, Boston’s #1 radio station for new music. “Not since Springsteen and Bono have I seen a lead singer with his talent and charisma.”

The Group has been touring non-stop and packing venues across the country including the Mercury Lounge in New York City, Shubas in Chicago, The Roxy in Los Angeles, The Belly Up in Aspen, and their now legendary, sold out show at the Paradise Rock Club in Boston (where the band had one of their fans, Tom Hamilton of Aerosmith, join them on stage).

After having shared the stage with Jason Mraz, Rusted Root, Bela Fleck, John Hiatt, Robert Randolph and the Family Band, Ziggy Marley, Little Feat and many others, AEG has been building their fan-base exponentially.

The band has been a festival favorite around the country, including appearances at Oyster Ridge in Wyoming, Rothbury in Michigan, Wildflower in Texas, Nateva in Maine, Earthfest in Massachusetts and The Download Festival, also in that state.

With their new release underway the Adam Ezra Group will continue their national tour with new music and a momentum that is catapulting them towards being one of the country’s most talked about bands.

During the winter of 2008/2009 the two decided it was time to do something positive for residents who would be staying around town because of the unsettled economic climate, and to encourage them to shop locally and support Darien’s merchants.

“Penny and I are grateful for the broad support we have received over the last number of years in our efforts to work with the Planning & Zoning Commission and the various town boards and volunteer organizations in improving the downtown, and we wanted to find a way to say thank you,” Genovese said.

“We also wanted to remind residents of the importance of supporting our local merchants, particularly in these difficult times, and so these events are being offered free of charge … all that we ask for in return is that people do their best to support local retailers and business owners,” he continued. “If you have a choice, dine or shop locally, because by doing so you are helping create a more vibrant downtown for Darien, and you enable all of us to give back in this way.”

For more information, go to the Darien Summer Nights website or Facebook page for live updates on the concert series.