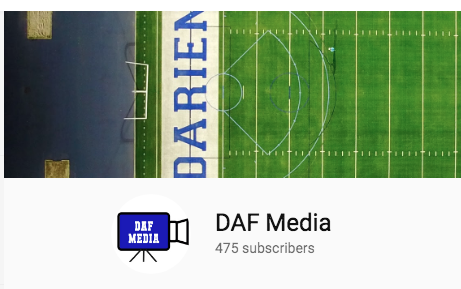 The Darien Athletic Foundation and The Darien Foundation have announced that they have agreed to a joint venture on the leadership and funding of DAF Media, a local live-streaming high-definition video network.

Sarah Woodberry, Executive Director of The Darien Foundation said, “We are excited to join forces on this venture to provide rewarding opportunities to the youth of Darien while producing a worthwhile product for our entire community”.

DAF Media broadcasts are produced by a volunteer staff of local youths and adults who learn to use broadcast cameras, computers, software, microphones, mixers, and lights plus all of the less-technical aspects like logistical planning that go into producing high-quality live broadcasts.

Broadcast events include arts, athletics, and community events. “We are thrilled to have The Darien Foundation joining forces with us on the DAF Media initiative” added Bruce Ferguson a Darien Athletic Foundation board member who will chair the committee that steers the joint venture.

DAF Media is managed by Damian Andrew who has extensive experience and achievement as a two-time Emmy Award-winning Sports Anchor/Reporter most recently with News 12 Connecticut.

Since its founding, DAF Media has broadcast over eighty events. Viewing is free via YouTube (www.YouTube.com/DAF-Media) and can be watched live or on-demand free of charge.

Community members ages fifteen and older who are interested in volunteering for the DAF Media team should email damian.andrew@darienaf.com.

This expanded mission allows the Foundation to fund community capital projects in addition to increasing the financial resources for technology in the Darien community.

The Darien Foundation has awarded over $3.9 million in grants to the Darien Public Schools, Darien Emergency Services and many community organizations.

The mission of the Darien Athletic Foundation (www.darienaf.com), established in 2012, is to celebrate and support all youth and high school athletics of Darien.

The DAF designed and funded the most recent renovations of the athletic fields at Darien High School, which are used by both youth and high school sports.

The renovations included making several fields into all-weather multi-purpose fields, a new multimedia scoreboard, a pavilion and permanent LED lights for the stadium.

DAF makes available to the public an archive of over 50,000 photos and in 2017 created DAF Media. The foundation is a 501(c)3 public charitable organization