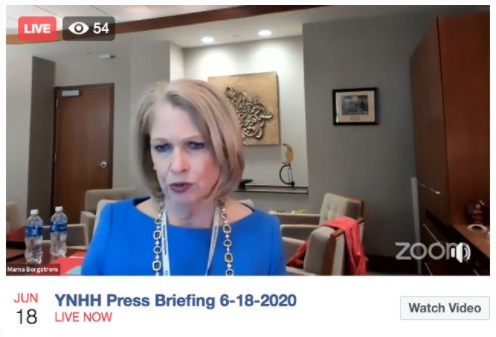 During a weekly press briefing on COVID-19 via Zoom with leaders of the Yale New Haven Health System, which includes Greenwich Hospital, COO Marna Borgstrom said she was proud of Connecticut for having a trajectory other states envy.

Connecticut’s COVID-19 numbers were not only lower than states in the West and Southwest, but also lower than neighboring states.

“We are at less than 10% from where we were at our COVID-19 peak in in-patient volume,” Borgstrom said.

“I feel like I have to pinch myself because we’re all reading the national news about patient admissions…Our numbers have consistently continued to come down,” she said. “I remember when we were over 850 patients in our system. Now it’s hard to believe we are below 70 cases for the system.”

At one point Greenwich Hospital had 126 cases. Today there are just 6 in-patients being treated for COVID-19.

Other hospitals in the Yale New Haven Health System include 34 in patients in New Haven, 25 at Bridgeport Hospital, three at Lawrence & Memorial in New London, and 0 at Westerly Hospital in Rhode Island.

“We are seeing fewer and fewer positive cases. That’s not something you’re seeing across the country,” Balcezak said.

As for testing, Balcezak said it was neither recommended nor feasible to test all 3.5 million Connecticut residents.

“Do be tested if you are symptomatic because you want to be isolating and preventing the spread of the disease,” he advised. “In general, social distancing, hand hygiene, and wearing masks that are (available) in stores should be sufficient, even if you are an asymptomatic or pre-symptomatic spreader to try to reduce that rate of transmission.”

Christopher O’Connor, Executive Vice President/COO, Yale New Haven Health, said the new focus was to reopen their facilities for community care and return to normal procedures. He said emphasis was on deep cleaning and screening of patients, visitors and staff.

As for development of COVID-19 therapeutics, Balcezak said a local company, AI Therapeutics, has a drug they believe has demonstrated it is effective in cell culture against SARS-CoV-2, the virus that causes COVID-19.

“There are also studies out of China that it is synergistic with Remdesivir, the drug that was approved by the FDA. It hasn’t been tested in humans,” he said adding that the health system is affiliated with the Yale School of Medicine and the Yale Center for Clinical Investigation and has existing relationships with researchers and organizations like AI Therapeutics.

“We have a mechanism to begin human trials with this kind of a drug,” he said.

Balcezak said nursing homes are requiring residents be swabbed and be negative if they are returning to non-COVID-19 units. The vast majority of nursing homes have dedicated units.

“Patients returning to a nursing home are going to floors where everyone has been exposed or has had COVID-19 to limit its transmission,” he said, adding that all staff are being tested. “Nursing homes are able to segregate between COVID and non-COVID and keep those residents safe.”

As for Connecticut’s Reopening Phase 2, Borgstrom said progress is being monitored carefully and there has been investment in contact tracing.

“If we see some spike, we’ll look at it on a regional basis, and we’ll go in and try to contain that. But I don’t think this administration has shown itself at all reticent to turn back the opening plans if they need to,” Borgstrom said, adding that Governor Lamont giving extra time for hair salons to prepare for reopening as an example.

“That created consternation, but if you look at national maps, and even states bordering us, they have seen a resurgence. Knock on wood, we have not. I’m cautiously optimistic,” she added.

O’Connor warned against a false sense of security, particularly with reopening of gyms and restaurants.

“We’ve seen across the country in places like Arizona, Florida and Texas, I think they went a little too fast, and they’re suffering as a result,” O’Connor said.

Balezak said Connecticut should not let down its guard, pointing to a situation in Beijing, which after opening up experienced a spike in cases two weeks later.

“That should be a cautionary warning for us,” he said.

Balcezak said there are estimates that less than 10% of Connecticut’s population has had COVID-19.

“That means that 90% of us are still susceptible and could still get it. For us to get immunity as a herd of humans, we need to get 80% to 90% of the population to have had exposure to something that has vaccinated them – hopefully a vaccination, not the disease.”

Balcezak gave an update on “PIMS,” pediatric inflammatory multi-system syndrome, saying it is likely the result f an inflammatory response from the SARS-CoV-2

“We know that children can be a vector for the virus both to each other and to older citizens. We need to be careful children practice the same hand hygiene, distancing and masking when possible with children because they can cause disease among themselves.”

He said the total admissions of PIMS cases was about 10 and that the total number of COVID-19 cases in children up to 18 years of age was 35, with no deaths.

Balcezak said he hoped that next week the system hospitals would begin to lift visitor restrictions.

He said care needs to be taken to keep elderly safe through social distancing.

“We have seen the disproportionate on the elderly of this disease. It’s incumbent on all of us to keep the elderly safe. He said he had not seen his parents, in their late 80s, since early March except for standing in their yard while they are on their deck.

“I’m going to continue to do that until and unless we have a vaccine,” he said. “We’re lucky that as the number of patients continues to decline, it just means the pre-symptomatic and asymptomatic circulation of the disease is less, but it doesn’t mean it’s zero.”

Lastly, asked for advice on eating in restaurants, Balcezak said, “The rule of thumb is if you’re spending more than 15 minutes less than 6 feet from someone with the disease and neither of you are wearing masks your risk of transmission is very high.

Asked if it was safe to sit across the table in a restaurant, especially indoors, from someone you do not live with, he said, “We’re still asking folks not to gather in groups that are not household contacts unless they can stay 6 feet apart.”