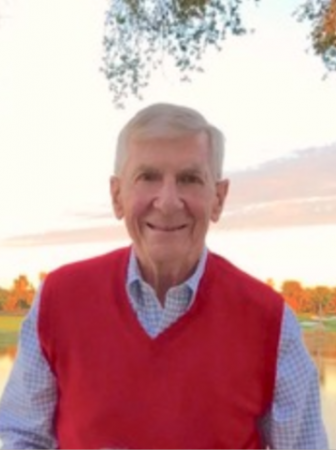 Michael Bishko, 80, passed away Aug. 9. His funeral will be on Aug. 28 and will be livestreamed.

Though fully vaccinated, he passed away following a courageous two-week battle with the COVID-19 virus at NCH Baker Hospital in Naples.

Mike was born in Passaic, New Jersey in 1941 and grew up in Clifton, New Jersey.

He graduated from high school at Mount St. Michael Academy in the Bronx in 1958, received a B.B.A. in accounting from the University of Notre Dame in 1962, and a J.D. from Notre Dame Law School in 1965. Subsequently, he obtained an LLM (Taxation) degree from NYU Law School in 1971.

Notre Dame continued to play an important role throughout Mike’s life. He was a member of the Notre Dame fencing team as an undergraduate and served as an assistant coach during law school. Mike enjoyed visiting the campus and attending football games with his children and grandchildren while rooting for The Irish at every chance he got.

After graduation from law school, Mike joined Arthur Young & Company in New York City and spent his career in its tax department in offices there and in Stamford and Newark, New Jersey.

Following the merger of Arthur Young and Ernst & Whinney in 1989, he served as the national director of Global HR Tax Services until he retired in 1999. Mike was a Certified Public Accountant and a member of the New Jersey Bar and other accounting and legal professional groups.

Mike was incredibly civic-minded and felt it was important to give back to the community of Darien that provided such a wonderful and happy place to raise his family.

He served on the Darien RTM in the early 1980s and was also involved with other local groups, including as a board member of the Darien United Way and of the Darien Nature Center.

Mike’s most fulfilling contribution to Darien was serving as one of the founding board members and first co-president of The Depot, Darien’s teen center.

The Depot was a labor of love for Mike, along with his wife, Carol, and countless Darien residents and local businesses. Attending The Depot’s 30th Anniversary Celebration in February 2019 with Carol and his two daughters brought much happiness to Mike.

There was so much in this world that Mike loved — traveling and experiencing different cultures and cuisines, Notre Dame (particularly Notre Dame football), learning about history and visiting historic sites, playing golf with friends and family at Country Club of Darien and at Mediterra in Naples, Florida, attending Broadway theater, bobbing serenely on a raft in his pool, skiing with his children, dressing up as Santa Claus every year to the excitement and surprise of his children and subsequently grandchildren, spending time with his and Carol’s many friends and family (from Connecticut, Florida, New Jersey and the Midwest) — and above all he adored Carol, his wife of over 54 years.

Mike’s grandchildren meant the world to him; they lit up his life and brought him immeasurable joy. He relished every achievement (no matter how modest), every story and every photo of them. Mike’s favorite activities in retirement were finding ways to engage in fun and educational activities with the grandkids as well as cheering them on from the sidelines at their sporting events. And no visit with the grandkids was ever complete without Grandpa making homemade ice cream with them — a tradition loved by the grandkids.

Mike enjoyed a full 80 years of life surrounded by family, friends and an abundance of love.

Mike is lovingly remembered by his wife Carol); his three children and their spouses: Christopher and Liat Bishko (Annabelle, Brooks and Nate) of Hillsborough, California; Jennifer and Mark Malcoun (Emma, Madeleine) of Darien; and Liz and Chris Ezbiansky (Sophie, Jack) of Darien;, as well as his brother, John, and John’s spouse, Mary Ness of Naples, Florida. He is also remembered by countless extended family members and friends that he loved dearly.

A funeral service will be held at 10 a.m., Saturday, Aug. 28, 2001 at St. Luke’s Episcopal Church, 1864 Boston Post Road, Darien, and a video livestream will be available for those wishing to participate virtually. Burial will be private. The family wishes to invite friends to the Country Club of Darien, 300 Mansfield Ave.,  for an outdoor reception.

In lieu of flowers, for those who wish to consider a donation, Mike was particularly moved by the work of St. Jude Children’s Research Hospital and The Tunnel to Towers Foundation.