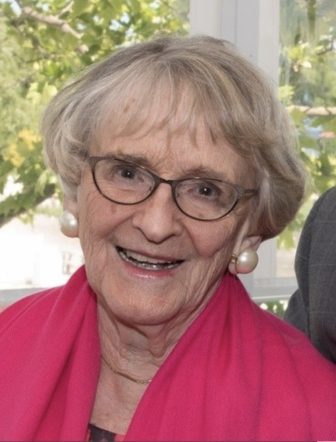 Born in Nebraska to the late Beatrice and Alfred Pittman, and raised in Chicago and Boston, Judy moved to Darien in the early 1950s after college (Principia) and marriage.

She and her husband, Paul, and their two sons, Alfred and John, lived in a home they built in Delafield Island. They were also founding members of the Christian Science Church in Darien on the corner of the Post Road and Salt Box Lane.

While her children were still quite young, Judy discovered a knack for selling real estate, arranging two sales before deciding to go into the business. She established her own company — Tibbetts Real Estate — in 1967 at the corner of West Avenue and the Post Road.

In 1974, the growing firm relocated to its longtime location on Corbin Drive across from the Post Office, where it remained until she decided last year to merge the property with Baywater Properties’ Corbin District development.

Judy developed a vision of conducting her real estate brokerage the “right” way, always choosing the most principled approach, even if it wasn’t the easiest or most popular path.

Although it was often said that “Judy could sell a stick,” she soon learned that teaching others how to sell real estate in a professional and ethical way brought her greater satisfaction, which was the fundamental reason for starting and managing her own company rather than concentrating exclusively on her own work in sales.

She was full of innovative ideas and had the energy and enthusiasm to bring them to fruition. Some of these ideas forced change and progress to the Darien real estate market, often despite strong opposition. For instance, her brokerage started the use of “For Sale” signs in Darien, which was the very first step in opening up information about properties for sale to the public at large. Although she endured harsh criticism for this decision, her fellow Realtors gradually accepted that this was the wave of the future and followed her lead.

In the pre-internet age, Judy was always looking for ways to promote her business, including publishing newsletters, lending her famous antique replica popcorn machine to local charities, hosting seminars, affiliating with Better Homes and Gardens, and even starting her own mortgage company (Network Mortgage).

Her two sons followed her into various aspects of the real estate business. Alfred, a general-practice attorney specializing in real estate law, is a partner in the Butler Tibbetts law firm. John, who joined her company in 1981 and forged his own career in brokerage and property management, will continue to operate Tibbetts Real Estate.

Judy and Paul were members of the Tokeneke Club, where she enjoyed playing tennis. They also built the family log cabin in Vermont, where Judy found an outlet for her interest in gardening. Visitors to her office and church were often recipients of the bounty from her vegetable garden there, and she enjoyed the challenge of transforming her difficult property in Darien into a beautiful garden.

In addition to her sons, Judy is survived by John’s wife Caroline; their children, Laura Witney (Robert) and Parker; and Alfred’s children, India, Austen, and Isabel.

The family hosted a small, private gathering at her home to remember her.