Traveling to Maine for the YMCA Northeast Regional Gymnastics Championship for the third straight year was worth the mileage as eight Darien YMCA gymnasts captured All-Around(AA) titles for their level and age group and the Level 6 and 8 squads were team champions.

— an announcement from Darien YMCA

The Level 8s won the team title with a score of 112.275, nearly seven points more than the second place team. Tori Ware set the pace, topping the podium on floor and AA in the 14-15 age group with 9.5 and 36.925 and placing second on bars, third on beam and fifth on vault. Leilani Nguyen was champ on vault and bars with 9.2 and 9.525 along with fourth on beam and second AA.

Olivia Perkins scored third on vault and fifth on bars, beam and AA. Saskia Chermayeff took fourth on floor and seventh AA while Bella DeStefano was second on floor, fourth on vault and sixth on bars. Sofia Iuteri vaulted to second and was sixth on floor.

In the 12-13 age group, Nadia Borja was silver medalist on bars, beam, AA and vault where she tied with Anna Moss and also tied for bronze on floor with Abigail Nevin. Moss was also second on floor. Nevin placed third on beam and AA and tied Sofia DeStefano for the vault title with 9.2.  Sofia was also third on bars. Sarah Cross flipped to first on floor with 9.425. 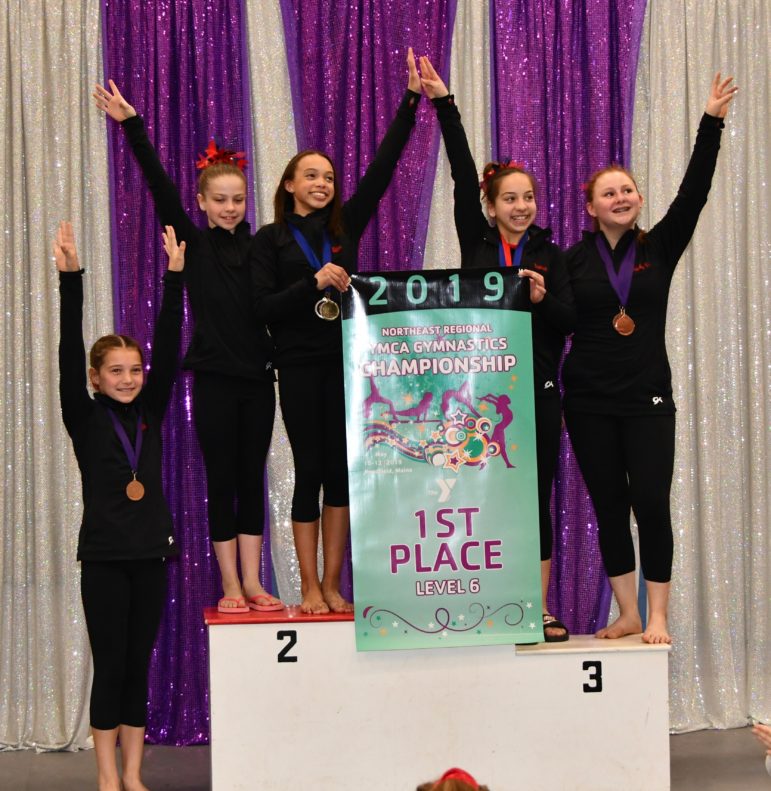 The small but mighty Level 6 squad won the team title by nearly four points, scoring 110.525. Alexa Bell led the scoring, taking first on beam, floor and AA with 9.625, 9.525 and 37.15 in the 13s group and placing second on bars. Tanner Generoso was the bars champ with 9.25, placed third on vault and second on beam and AA.

In the 10-12 group, Ava Licata placed eighth AA, tenth on floor and sixth on bars and beam.  Ellie Davies scored fifth on floor, eighth on beam and ninth on vault.  Sophie Root took silver on beam and was ninth on floor. On vault, Emily McKee placed fifth, Penelope Arredondo sixth and Sophia Geffner eighth.  Alex Decsi swung to fourth on bars and was sixth on vault in the 14-15 group.

In a tightly fought team competition, the Darien Level 7 squad took second, just .075 out of first. Emma Kelly paced the team, topping the podium on beam and AA with 9.5 and 36.425 in the 14s group and placing second on bars and fifth on vault.  Megan Mitchell tumbled to second on floor.

In the 11-12 group, Julia Decsi had a full house, placing second on vault, floor and AA and fourth on bars and floor. Lauren Smith soared to first on vault with 9.375 and was fourth on floor. Anna Primmer vaulted to second in the 13s group and was third on floor. Kristie Alianiello earned fourth on floor and sixth on vault.

Lana Schmidt was the vault champ with 9.25 in the 15 and up group and took bronze on beam and AA.  Placing sixth were Kerry McDermott on vault and Lily Fairleigh on bars.

Eve Calio scored third on bars, fourth AA and second on beam and floor. Courtney Timmeny flipped to fourth on floor and was seventh AA. Taylor Davies captured fourth on beam and sixth on floor. 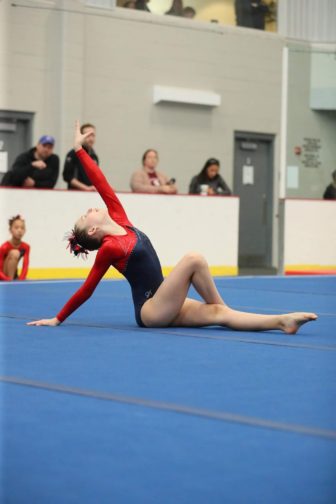 Darien YMCA Level 4 gymnast Olivea Rosenbaum hit a dramatic pose at the end of her floor routine, which scored 9.0 at the 2019 Northeast Regional Championship meet.

Tess Hennigan led the third place Level 5 team, taking the AA title with 36.175 in the 9-10 group and placing third on floor and second on bars and beam.  Chloe Sernick took bronze on vault and floor in the 13s group and fourth AA.

Mina Leon was champ on floor with 9.35 in the 11s group, along with sixth on bars and AA  and fifth on beam where she tied Katie Primmer.  Madeleine McGivney earned bronze on beam and was fifth on bars while Elsa Del Bene took second on beam and eighth on floor.

In the 12s group, Reilly Costello scored fourth on bars, seventh AA and fifth on vault and beam.  Alexia Buchesky vaulted to seventh and was sixth on beam and floor.

Sabina Molnar had a stellar meet for the fourth place Level 3 team, taking first on beam, floor and  AA with 9.4, 9.55 and 37.60 plus fourth on bars and seventh on vault in the 8s group.

Nicole Recinos was a standout in the 10A group as well, taking first AA with 36.575, third on vault and sixth on all other events. Morgan Wise flipped to fifth on floor, placed sixth AA and seventh on vault and beam.

Grace Creanza took second on floor, fourth on beam, seventh on bars and sixth AA in the 9A group. In the 9B group Heili Jalakas scored eighth on beam, followed by Kate Whitticom in ninth. Chloe Sherman earned her meet high scored on vault.

Reese Barrett topped the podium on floor in the 11B group with 9.6 and was fourth on vault and second on bars and AA.  Sloane Kosowsky vaulted to seventh and was eighth on bars. The team will compete next at the YMCA National Championships in Wisconsin Dells, Wisconsin.