What do Metro-North and the Merritt Parkway have in common, I mean, aside from often crawling at a snail’s pace? Well, both seem to be hotbeds of unenforced safety rules.

Anybody who has driven the parkway knows that its 1930s design cannot accommodate trucks, but they are there all the time. Tom Lombardo, a fellow board member on the Merritt Parkway Conservancy, recently conducted an unscientific survey to quantify the problem.

In a single hour one weekday morning he logged 212 trucks, buses and commercial vehicles traveling in both directions on the highway. That’s more than three per minute. Now compare that number with the fact that state police issued only 581 tickets to trucks on the parkway in all of 2020 and you get a sense of how unenforced this rule is.

Mind you, trucks on the Merritt Parkway are only facing a $90 fine, if caught — which they aren’t, often, until they strike a bridge. The King Street Bridge in Greenwich was struck 24 times in one year.

State police are understaffed and spread too thin. Enforcing the “no trucks” rule isn’t high on their priorities list. 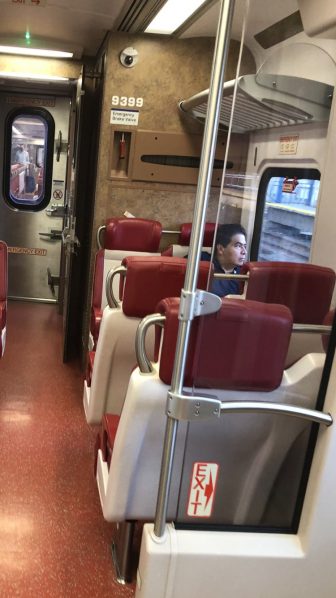 Unmasked on a Metro-North train (a photo, collected by Jim Cameron, from a commuter’s post on Twitter)

But on Metro-North, rules enforcement should not be the problem it has become, given the staffing of conductors on all trains. Yet, in the midst of the resurgent COVID pandemic, the railroad is not enforcing a simple rule designed to keep conductors and passengers safe: wear a face mask.

They’re still wasting money and manpower disinfecting car interiors, wiping down surfaces and spraying the seats. Never mind that the CDC has been telling us for months there’s only a one in 10,000 chance of getting COVID by surface contact.

Oh, the railroad does a great PR job explaining how to wear a mask, but they don’t enforce what is now a Federal TSA regulation: wear a face mask or face a fine. A recent Freedom of Information request of the MTA Police by CTExaminer showed that since last September they have not issued a single ticket to mask rule violators in Connecticut. Not even one!

Yet I see social media complaints every day, often with pictures, of people on trains riding maskless and not being challenged, let alone ticketed, by Metro-North staff. In some cases passengers say even the conductors aren’t fully masked. 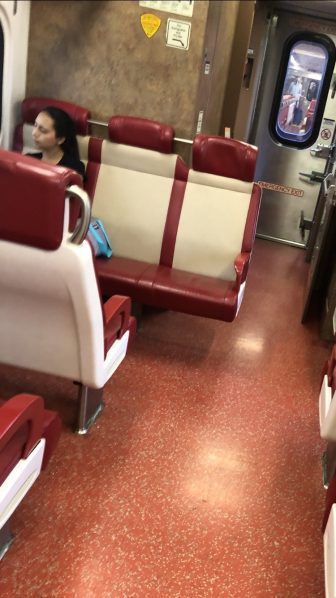 No mask here, either. (Photo, collected by Jim Cameron, that had been posted by a commuter on Twitter.)

These reports are duly logged by MTA’s social media watchers, complete with date, time and location information and “reported to supervisors” — and then, like with so many complaints to the railroad, nothing changes.

Are these conductors disciplined? Retrained? Does anyone do anything to stop this potentially life-threatening non-enforcement of a Federal public health rule? Apparently not, given the growing number of reports we see.

The MTA has seen 136 of their own employees die of COVID since the pandemic began. They’ve even built them a memorial. And sure, they’ve passed out thousands of masks to subway, bus and train riders. But what good are free masks if the rules to wear them aren’t enforced?

The TSA and FAA have issued tens of thousands of dollars in fines in 1,300 cases of non-mask wearing on airplanes. But on Metro-North not a single ticket? Not one.

If trucks aren’t ticketed on the Merritt Parkway and maskless riders aren’t penalized on the train, people notice the laws aren’t being enforced, and scofflaws rule the roads and rails.