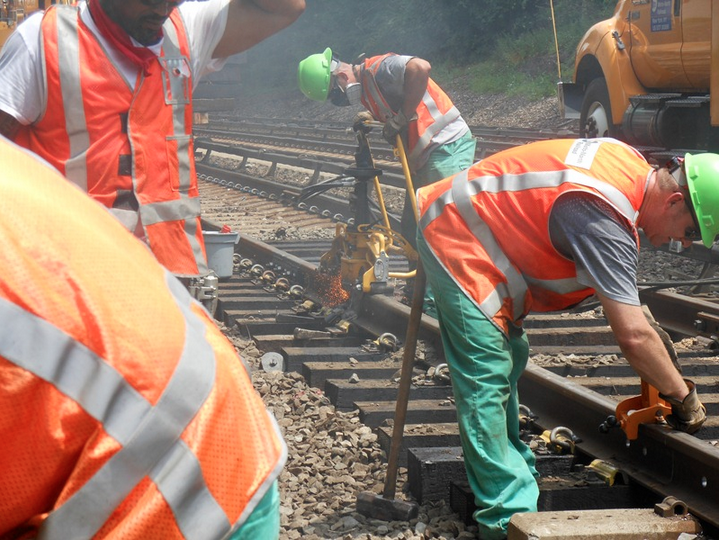 Metro-North crews work on a track (in The Bronx, 2013). Picture from the Metropolitan Transportation Authority of the State of New York (via Wikimedia Commons)

Darien police and town officials expect the railroad crossing on Camp Avenue to be replaced in a project taking probably five to six days in late August, closing the road near Springdale Florist. 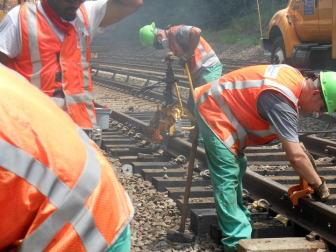 Metro-North crews work on a track (in The Bronx, 2013). Picture from the Metropolitan Transportation Authority of the State of New York (via Wikimedia Commons)

Anderson said Aug. 21 was the expected start date of the road closure, but Stamford officials were about to be consulted regarding a traffic detour through streets there, indicating the date might not be set in stone yet.

The project might be completed as quickly as 4.5 days but could also take as long as seven days. The work should be complete well before Darien schools reopen on Sept. 1 (the Friday before Labor Day), he said.

Anderson, commander of the administrative services division of the police department, told the Darien Police Commission on Thursday that the state Department of Transportation, which is normally pretty slow to get a project going, has put this project on a “fast track” to get it done quickly and had originally wanted to start the project as early as Aug. 7.

Connecticut DOT originally wanted to close Hoyt Street nearby for 10 days as well, to replace the railroad tracks at that crossing this year, “but there’s no way that can be done,” Anderson said.  Instead, that work, which would also close train service to the same two stations, will take place sometime next year. Hoyt Street (which is also state Route 106) will remain open during this year’s project.

DOT officials had asked Anderson if the local traffic authority (which is also the Police Commission) would agree to having traffic from Camp Avenue detoured onto nearby Greenwood Avenue which at its south end connects to Camp Avenue and at its north end connects to Hoyt Street just north of the Hoyt railroad crossing.

Greenwood Avenue is a small neighborhood road with speed bumps, and at its intersection with Hoyt Street it’s difficult for drivers leaving Greenwood to see oncoming traffic, he said. Anderson told DOT officials that he didn’t think the traffic authority would agree to have it used for diverting all the traffic between Camp Avenue and Hoyt, and he would recommend the board not approve it.

Those are much bigger, wider roads than Greenwood Avenue. Anderson said he thought Stamford officials would agree to the detour.

Traffic could still use Greenwood, which would not be closed, but detour signs wouldn’t encourage it, he said.

The work at the railroad crossing would include replacing the entire track and even the crushed stone “ballast” underneath it, although the project does not include replacing the signals, Anderson said. The work is expected to continue day and night until the track at the crossing is completely replaced, he said.

One thought on “Camp Ave Expected to Close, No Trains to New Canaan for 5 to 6 Days in Late Aug.”