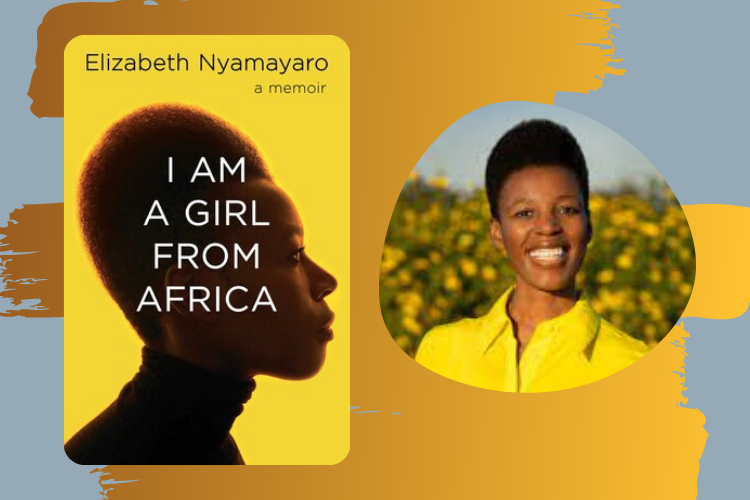 Barrett Bookstore and World Affairs Forum are thrilled to welcome Elizabeth Nyamayaro as she celebrates the release of her new memoir, “I Am a Girl from Africa.”

— an announcement from Barrett Bookstore

You can REGISTER for this free event HERE.

The inspiring journey of a girl from Africa whose near-death experience sparked a dream that changed the world.

When severe draught hit her village in Zimbabwe, Elizabeth, then eight, had no idea that this moment of utter devastation would come to define her life purpose. Unable to move from hunger, she encountered a United Nations aid worker who gave her a bowl of warm porridge and saved her life.

This transformative moment inspired Elizabeth to become a humanitarian, and she vowed to dedicate her life to giving back to her community, her continent, and the world.

Grounded by the African concept of ubuntu—“I am because we are” — “I Am a Girl from Africa” charts Elizabeth’s quest in pursuit of her dream from the small village of Goromonzi to Harare, London, New York, and beyond, where she eventually became a senior advisor at the United Nations and launched HeForShe, one of the world’s largest global solidarity movements for gender equality.

For over two decades, Elizabeth has been instrumental in creating change in communities all around the world; uplifting the lives of others, just as her life was once uplifted.

The memoir brings to vivid life one extraordinary woman’s story of persevering through incredible odds and finding her true calling—while delivering an important message of hope and empowerment in a time when we need it most.

Elizabeth Nyamayaro is an award-winning humanitarian and former United Nations Senior Advisor on Gender Equality. Born in Zimbabwe, Elizabeth has worked at the forefront of global development for over two decades improving the lives of underserved populations and has held leadership roles at the World Bank, World Health Organization, UNAIDS, and UN Women. I Am a Girl from Africa is her first book.

World Affairs Forum creates local conversations about global issues. They bring foreign policy and international relations experts to venues throughout Fairfield and Westchester Counties to broaden awareness of global affairs and America’s role in the world. Since 1946, they have been connecting our community to our world as one of more than 90 councils nationwide in the World Affairs Councils of America. Learn more about their programs and membership at www.worldaffairsforum.org.

Praise for ‘I Am a Girl from Africa’

“Elizabeth Nyamayaro has written a wonderfully accessible and moving memoir that masterfully weaves her own story into the contemporary fight for global gender equity. Traveling with Nyamayaro — from Tblisi to Montevideo — is both inspiring and maddening, seeing all that has been accomplished and all that’s left to do. Somehow, through it all, she manages to maintain an unwavering optimism — and a belief in the power of NGOs, education, collaboration, and even (gasp) globalism — that buoys the soul and reminds us that there’s no progress without progressives, no light without the torch-bearers.”

– Dave Eggers, author of The Parade and The Captain and the Glory

“From the first page to the last, I could not put down this book. ‘I Am a Girl from Africa’ is a story that can uplift and inspire every girl and boy from every part of the world. Beautifully told, and beautifully lived.”

“More than a heartwarming and uplifting memoir, ‘I Am a Girl from Africa’ is a story of millions of girls around the world – and a true testament of what is possible when girls are given an equal right to quality education. Through Elizabeth’s remarkable story, we are reminded that education remains a closest thing to a silver bullet when it comes to gender equality.”