When Darien police went to a house on Brush Island Road after a report that a car alarm had gone off, they found a 23-year-old woman in the garage with knives in her pockets, police said.

According to police: The woman said she was visiting a friend, but no one was home, and police later concluded the statement was a lie; she also told police she had forgotten her own last name, then refused to talk to police when she was at the scene. She was arrested. 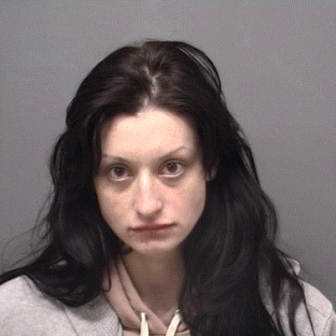 Arrest photo of Lara Agatstein, 23, of Stamford, charged with burglary and larceny on Feb. 24, 2019 in Darien.

The report of the car alarm came to police at 9:56 a.m. on Sunday, Feb. 24. When they arrived at the house, they saw the garage door ajar.

Inside the garage they saw someone and told the person to come outside, which she did. Eventually, she was identified as Lara Agatstein, 23, of Stamford.

Asked what she was doing in the garage, she said she was visiting a friend. According to the police announcement of the incident: “It was determined that Agatstein was lying and had no legitimate reason to be on the property.”

Police found two knives in her pockets and determined that those belonged to the homeowner.

Police also determined that Agatstein had only entered the garage, not the rest of the home. She had also entered one of the vehicles in the driveway, since papers from the vehicle’s storage areas were strewn about inside the vehicle. The car alarm had sounded off from that vehicle.

Agatstein, of Austin Avenue in Stamford, was charged with third-degree burglary, third-degree bugrlary from a motor vehicle, interfering with an officer and sixth-degree larceny.

She was initially held on $5,000 bond until a bail commissioner later released her on a written promise to appear March 11 in state Superior Court in Stamford.

She hasn’t entered a plea in that case and when Darien police arrested her on Sunday, she was out of jail on $5,000 bond.