A 20-year-old Darien woman had been drinking before her vehicle rolled over in the front yard of her home, police said. Police did not say whether she or her passenger were injured, although they said the driver didn’t appear to be. 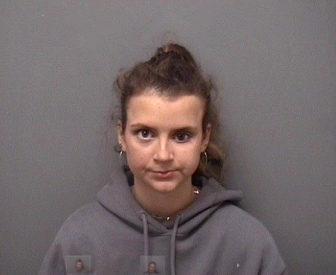 Arrest photo of Natalie Harper, 20, of Canoe Trail, Darien, charged with driving while under the influence for a person under age 21.

Police were called at 7:26 p.m. by someone reporting that the vehicle had rolled over at 6 Canoe Trail, in the Tokeneke section of town.

When they spoke to the driver, Natalie Harper, 20, of that address, she became “increasingly upset and incoherent,” according to the police announcement. The passenger told police that he or she and Harper had been drinking alcohol earlier that morning.

Police saw that Harper was unsteady on her feet, and they could smell an alcoholic drink on her. She refused to submit to field sobriety testing. Police thought it was possible that she had injuries from the accident that they couldn’t see, so she was taken to a hospital.

Police submitted a search warrant for the hospital’s medical report of the incident, which showed Harper’s blood-alcohol content was 0.05, which is below the legal maximum (0.08) for an adult driver, but not for a driver under 21 years old (the limit for those under 21 is 0.2).

Police applied for and received an arrest warrant charging Harper with driving with an elevated blood-alcohol content for her age and on Oct. 30, she turned herself in at Police Headquarters. She was released on a promise to appear Nov. 30 in state Superior Court in Stamford.