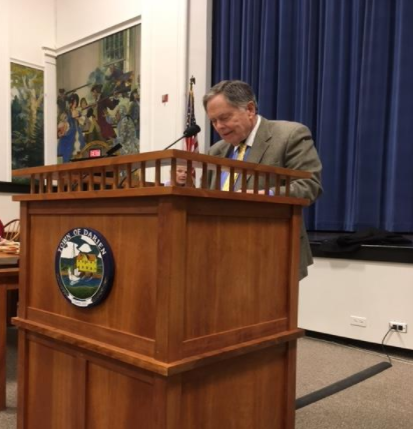 The Representative Town Meeting on Monday approved a three-year teachers union contract that raises salaries by an average of 3.4 percent each year but is expected to result in some other savings.

The contract will be the biggest single item in the town budget for the next three years. For this fiscal year, ending June 30, salaries paid under the current contract cost the town about $39.4 million out of a total town budget of $140.6 million, or 28 percent of the total.

That amount is expected to rise by an estimate of $1,339,889 in the 2017-2018 fiscal year and by slightly more in the following two years. (None of the figures in this paragraph or the previous one were given to RTM members before the vote. Darienite.com asked Superintendent of Schools Dan Brenner and school district Finance Director Michael Feeney for the amount of the increase, and we calculated the $39.4 million figure from that.)

The RTM also voted overwhelmingly on Monday to approve:

The RTM heard the recommendations about the contract from two committees, then voted on the contract without discussion. The vote was 63 members in favor, two opposed and two abstaining. A four-year contract for the school district’s administrators union, the Darien Administrators Association, passed by a similar overwhelming margin. 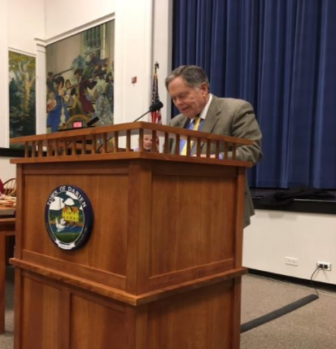 The vote essentially locks in spending on the salaries, although the Board of Education and RTM each have the option of cutting spending. Any large cuts in spending could result in laying off teachers, since personnel costs make up most of the school district’s budget. If the RTM had rejected the contract, or if it wants to break the contract in the future, it would go to a state arbitrator.

As Jack Davis, chairman of the RTM Finance and Budget Committee told the RTM when he was giving that committee’s recommendation for approval, state arbitrators tend to side either with unions or local governments in making their decisions, not split differences anywhere near the middle.

Here’s an emailed response from school district Finance Director Michael Feeney to Darienite.com on annual increases in costs from the teacher’s contract:

The value of the 3.4% salary increase (inclusive of step and GWI) in each of the 3 years of the contract equates to the following:

A town’s ability to pay is a strong factor in their decisions, Davis said, “and, historically, towns such as ours do not do well in arbitration.”

The contract includes all of the school district’s staff certified as teachers (except for administrators), so guidance counselors and school psychologists are covered by it. Other staff not included in the contract are aides, maintenance workers and cafeteria workers.

Teachers’s salaries are based on wages and annual “step” increases. The steps increase wages between 2.6 and 2.8 percent per year (because the increases are uneven, depending on the number of years of employment) and a general wage increase brings the total average raise to 3.4 percent per year. That increase is roughly what similar school districts in Fairfield County have been giving teachers in contract negotiations, district officials have said.

At a meeting last week, Brenner said the contract also has a number of provisions that will save money for the town. Most Middlesex Middle School teachers will have a course load of 4.5 classes rather than 4 classes, as they do this year. As a result, the district will eventually cut back on its work force in the school through attrition, he said.

The administrators contract includes a provision that increases the work year for elementary school assistant principals from 190 days to 197 days. “That’s a 3.67 percent increase,” Davis pointed out.

One RTM member, Clara Sartori (a former member of the Board of Education) commented on the administrators union contract before the vote. She said she hoped that in the future there would be a contract provision that school principals would be expected to inform the school district earlier in the year if they were stepping down from their jobs.

Twice in the past five years, district officials were surprised by two principals who handed in resignations or retirement notices close to the end of the school year. No Board of Education members (who were present for the RTM votes), responded to Sartori, and RTM Moderator Seth Morton said he was sure the Board of Education would take her suggestion under advisement. 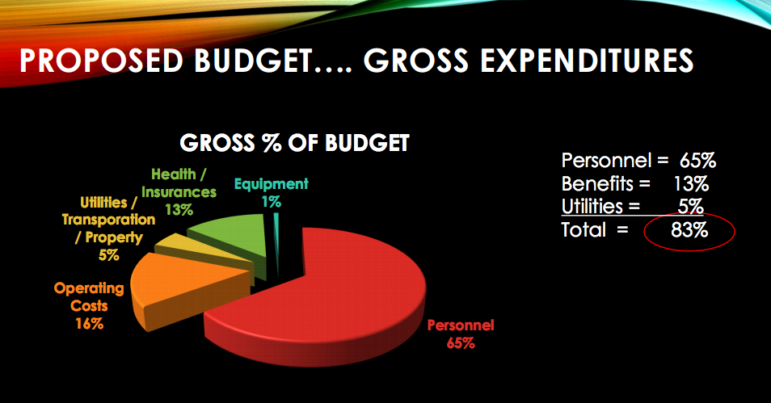 As this pie chart from Superintendent Dan Brenner’s Jan. 5 budget presentation shows, 65 percent of his proposed budget was for personnel costs (essentially salaries) and 13 percent for health insurance and similar benefits (a total of 78 percent). The teachers contract takes up most of district personnel costs, and the school budget takes up most of the town’s budget. (The Board of Education didn’t make very large changes to the budget, so these percentages are close to the proposal as it now stands.)

Correction: RTM Member Clara Sartori said that twice in the past five years school principals have left at the end of a school year without giving much notice to district officials, not twice in the past year, as was stated in an earlier version of this article.